My plan for today is to write a book review for a novel that I have recently finished.

I was about to start when I opened my Facebook just to check what’s new.

I have seen a friend who changed her display photo with our college instructor. There are comments with sad faces. I looked at it and then scrolled down.

Minutes later I received a message from Anjeline, a fourth year Journalism student and Mabuhay newspaper trainee whom I spend time during some coverages. She asked if I heard the news about our professor, and in just seconds, a sense of dread struck me.

I hurriedly check my teacher’s Facebook page and as I read the message of condolences I am caught off-guard.

My hands got cold.

My heart beats so fast.

I cannot believe what I am reading..

I never thought that that will be the last words that I will hear from him. If I knew, I would have said a lot, but because I didn’t, I just smiled.

It has been just Saturday, just almost two days ago. And now, according to his friends and colleagues, he’s dead and it is because of his heart.

Now, instead of writing a book review, I am writing a eulogy for a person I never thought I would write one this early. I may not have known him for so long because I am just one of his numerous students.

But he has indeed touched my life, especially my writing life, in a way that no one has and no one will ever will.

Instead of stating the facts about him that everyone knows, I would like to share some personal memories that I, and my Journalism classmates, had with him.

As he is a journalist for everyone, he is an instructor for us first.

As a teacher, we like him a lot because his test papers are free. May it be a one-page exam or two to three pages, he will never get any portion of our monetary treasures.

We also love the side trips, especially during our Photo Journalism classes.

And more often than not, there are always snacks whenever we leave BSU grounds. He is really generous.

As we are naughty students, we also love to take note how he pronounces certain words. During our PhotoJourn class, he used to say ‘blard’ (blurred) often. And in all our classes, he will say ‘bullsit!’ (bullshit) to express his anger with those crooked politicians and equally corrupt ‘haosyaows’ (hao shao) journalists.

I think he knows that we laugh because of those words, but he just ignored it. Maybe because he was also once a naughty student.

He is also a very supportive instructor.

He willingly helped me when I can’t schedule an interview with the governor. He also said yes when I lobbied my articles in Mabuhay. Also, I will not forget how he pushed me ‘carefully’ in a lot of crowd during one of the Independence Day celebrations in Barasoain, just to have a yummy breakfast. (Food is one of the perks in Journalism that he instructed me to enjoy at all times.)

Our final and I can say best memory with him as our professor was during our Pre-Graduation Party.

Aside from the yummy lechon that he and Mam Carmela have for us, I have come to realize how much he loves us, the whole BAJ First Batch. Although we have disappointed him at times, cause he’s also strict, especially with deadlines, his actions and laughter expressed that he is proud of us. Because we are his ‘First Class.’

He also showed his ‘unspoken’ love for BAJ 4-A Batch 2012 when he went and took some photos during our graduation day.

Dinobels, (our nickname for him when he is not around), is not just an instructor for his ‘First Class’, he is indeed a ‘bully’ friend and father that we will all miss.

After graduation, I never thought that I will work for and with him because he is really a good writer and he has all the right to criticize my work.

It took me a lot of courage when I asked him if there is an available post for Part-time Writer in Mabuhay. And for a close to a year now.. I have been his colleague.

As what I have expected, he took no reservations in critiquing my work.

I think for him, an article is either good or crap. And because he is my torMENTOR, my once crap articles have gradually improve. I have become more keen to details, grammar, and ideas because of his constructive negative comments. He is indeed the torMENTOR who made me a better writer.

But what really struck me is that he believes in me.

Though he never praised me personally or never gratified me verbally, I have felt it. When he asks me to cover an important event because he’s not around, when he introduces me as a Mabuhay writer, when he said that he hopes my articles will fill more space in Mabuhay .. I know that he has believed in me. 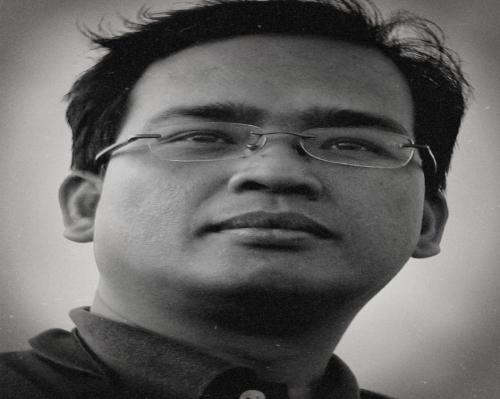 I would like to hate your heart because it ended your life. But, I can’t because it is the heart of a loving husband and father, a one of a kind Bulakenyo, a principled and unstoppable Journalist, a cool but strict instructor, and the Kindest ‘Promdi’ Tormentor that I will forever remember.